This is the manual for Boing Kit.

Mouse-over a component’s parameter to see a tooltip for more detailed explanation. 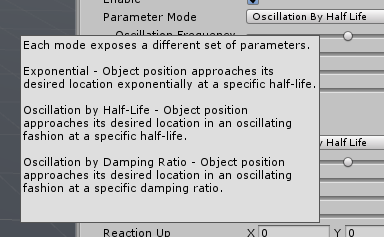 On the other hand, GPU samplers apply bouncy effects to each vertex of each reacting objects through vertex shaders.

The BoingBones component applies bouncy effects to skeletal bones or hierarchical object transforms. Bouncy bones are specified using bone chains. Each bone chain includes the specified root bone all the way to bones that don’t have any child or are flagged for exclusion.

NOTE: Due to technical limitations, the effects of the BoingBones component can be displayed properly in only one editor tab. For example, if the scene view tab and the game view tab are both visible, then only one of them will display the effects properly. This only affects the Unity editor and does not affect in-game cameras if there are multiple ones. If there are cameras other than the main camera that render to off-screen render targets, then the effects should be rendered properly.