This is the manual for Squash & Stretch Kit.

Traditionally, animators use the squash & stretch technique to enhance the sense of motion. Objects are squashed when experiencing sudden impacts, and are stretched when moving at high speed.

The SquashAndStretch component that comes with Squash & Stretch Kit is the core part of the package. Simply add it to a game object and you’re good to go (although a once-per-project setup described below might be needed). The component scales the object based on velocity and sudden impacts. It also works with Unity’s built in physics (objects with Rigidbody or Rigidbody2D components)!

Done! We don’t know if Unity will ever allow us to define script execution order at run-time again. But if that happens, we will be sure to update the SquashAndStretch component so that you don’t have to go through this setup any more.

Note that if a game object is part of Unity’s physics simulation (having a Rigidbody or Rigidbody2D component), the pre-position update happens at FixedUpdate() and does not need this setup, since FixedUpdate() is tied to physics and runs before all calls to Update().

It is also important that you adhere to Unity’s guideline for updating object transforms. All scripts that update an object’s transform should go into Update(). It’s good practice anyway, since people writing their own LateUpdate() would expect all modifications to object transforms to have been done at this point.

Once a SquashAndStretch component has been added, you can see a list of its parameters in the Inspector menu. This section explains what they mean.

You can also mouse-over a parameter to see a tooltip. 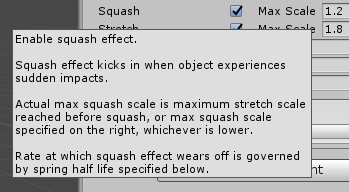 There are three different modes that you can pick from to best suit your needs.

If squash is enabled, the max squash scale defines the maximum scale in the direction perpendicular to the effect axis. Actual max squash scale is this value or maximum stretch scale reached before squash, whichever is lower. Rate at which squash effect wears off is governed by spring half life.

If stretch is enabled, the max stretch scale defines the maximum scale in the direction parallel to the effect axis. Actual stretch scale applied depends on min/max speed thresholds (see below).

Anything using the underlying numeric spring simulator depends on this value. Spring half life is the duration (in seconds) over which the spring effect is reduced to 50%. Multiplying the half life by 10 gives roughly the time for spring effect to reduce to 0.1% (1/1024 to be exact). If you’re ever lost, 0.015 is a good value to start tweaking and experimenting from.
Half-life parameterization eliminates the need to guestimate spring constants. Who knows what a spring constant of 1.37 look like anyway!